Magid Magid enters the final few
days of campaigning as the Green Party lead MEP candidate in Yorkshire and the
Humber. As part of his Tour de Yorkshire inspired “🚀TOUR de MAG!D 🚀” he will be visiting York on Sunday 19th May.

The Green Party is
currently the largest pro-EU party represented in the European Parliament with
3 MEPs.

The party is looking to capitalise on its best ever local election results where it saw a 270% increase in the number of Green councillors.

As part of the Green
Party EU election campaign, Magid has been visiting towns and cities across the
region, with several of the other candidates joining him along the way. So far
he’s been to Doncaster, Sheffield, Bradford, Otley, Leeds, Barnsley and
Wakefield – discovering more about the region he hopes to represent. On Sunday
he’s coming to York to meet with members of the local Green Party, the national
Young Greens, York for Europe and other campaign groups. He’ll be visiting
Askham Bog in the morning and will then be campaigning in the town centre from
around lunchtime. Sunday evening he’s expecting to talk to a packed crowd at St
Lawrence Church Hall. Everywhere he goes he’ll be encouraging people to vote
Green on May 23rd!

“I’ve visited York
on many occasions and I’m looking forward to returning to learn more about this
amazing city. This tour has given me the chance to meet so many different
people and hear about the issues that matter most to them – including the
urgent need for climate action and a passion for remaining in the EU.

I’ve been honoured
to represent Sheffield as Lord Mayor for the last year and I want to extend
this now to represent the whole Yorkshire and Humber region. I want to
raise the profile of our region in the EU so that we never feel ‘left behind’
again. We need to be leaders, not leavers!

“But there’s so
much more to the European elections than Brexit. The climate emergency is the
defining issue of our generation and the Green Party are unapologetically
leading the way. Our message is really resonating, we’ve got a better story to
tell.”

“I know Magid well and
I’m proud to support him as our lead MEP candidate. Sunday gives us the
opportunity to share with him some of the great work we do in York. We never
expected to be holding these elections but we’re still in the EU and we still
have hope that we will be able to remain and reform. A vote for the Green Party
is a vote that says ‘Yes to Europe, No to Climate Change!'”

Last Wednesday (8th May)
The Green Party of England and Wales formally launched its campaign for the EU
election, setting out its position as the strongest pro-EU party.

Co-leader Sian Berry told
a packed press conference: “Our message to the people is very simple:
It’s time to say Yes to Europe, Yes to investing in communities, and No to
climate chaos. It’s also about saying a very loud No to the failed Brexit
project, and yes to transforming our society to one that puts people
first. The Brexit project led by Nigel Farage has capitalised on the
neglect of our communities and unleashed the darkest elements onto our nation,
bringing them dangerously close to the mainstream. The far-right are now a
sickness in our politics. But the Greens, full of hope and with a vision of the
future that has faith in people’s best instincts – we are the cure. The
Greens are the strongest pro-EU party.” 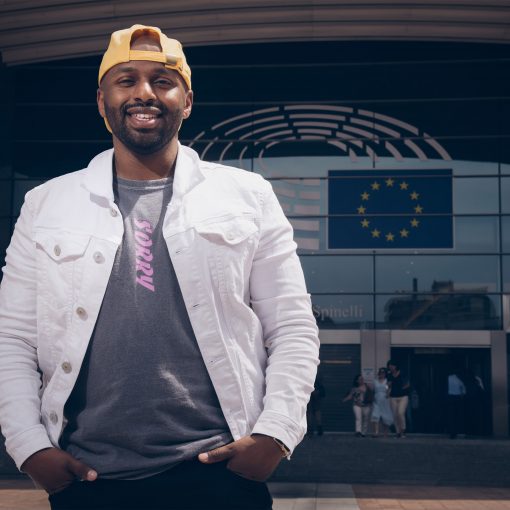 Hi =] To keep you in the loop with what on earth I’ve been up to in Brussels and Strasbourg, I’ve decided […]