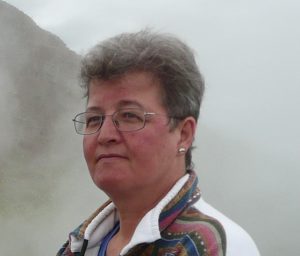 I have been a member of the Green Party since 2014, joining initially in Haringey in London where I then lived. I was actively involved in elections there in 2014, 2015, and 2016 and in the referendum campaign. I had been a member of the Ecology Party in the 1980s for a short time but then, because of political constraints relating to the work I was doing, I had to step down from that.

In 2017 my partner and I moved to York, and I became involved with the Green Party here.

I do leaflet delivery, door to door canvassing, and I was one of two campaign coordinators for 2 years until the end of 2021.

I am now Vice Chair; I agreed to stand for this role because I think the party needs more resources in the leadership team. Tom, as Chair, is doing a wonderful job but he can’t do it all on his own.

I also think that because we have 3 Councillors and are in the LibDem Green Administration we have to ensure that our work supports them as much as is possible./I come from a very political background; I grew up in Germany where my parents were active members of the Social Democratic Party and I started leafletting when I was 4; I was active in the Social Democratic Party there until I moved to the UK in 1978.

My activism on issues relating to the climate crisis and social justice and peace (all of which are interlinked in my view) have their roots in my lifelong Quakerism, my early experience of political activism and my attendance in 1970 of a conference during the inaugural Earth Day events. I have never looked back and have tried to make an understanding that we are part of the ecology of the planet central to what I do.

My partner and I have a cat, a small garden, and an allotment – all of which remind us daily of what matters. I see gardening as both an act of rebellion and an act of hope.