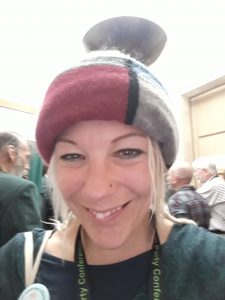 I completed an MSc in Research for Public Policy and Practice via UCL, specialising in autism research. I was  Research Assistant & Project Worker for the York Food Poverty Alliance 2018-19 and co-run a voluntary pay-as-you-feel cafe, The Real Junk Food Project: York.

Professionally, I have been an education and disability practitioner in Manchester, Jersey and currently at Yorkshire universities. Since coming to York in 2015 I have also worked for Barnardo’s in West Yorkshire and QA Research in York.

I completed one year as voluntary Projects Officer for the York Bus Forum, and is a regular activist for campaigns such as anti-fracking and YorSpace housing and have served some time as Yorkshire & Humber’s regional representative on Green Party Regional Committee (one of the national committees that run the Green Party or England and Wales).//Whilst living in Jersey I was secretary of the Reform Jersey Party, and political assistant to one of their elected members, which is where my interest in local party politics and campaigning for a more equal society really began. Now for the Greens, my role involves contributing to policy matters (children’s services, education, housing), and I work in the local party office assisting with casework, campaigns, planning events and coordinating volunteers.

I have a 9 yr old son – a Green Party activist in the making! – meaning family-friendly events and meetings are really important. Last but not least, I won over 1500 votes in the Micklegate by-election in June 2017, coming 2nd at the ballot-box (and 2 years later became a Councillor on my 2nd attempt ! )